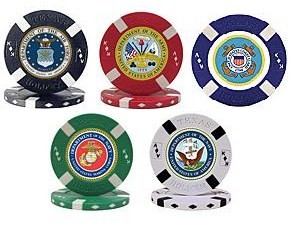 So, Just For Military in association with Pokerstars.net has launched its very own Military World Series of Poker Club.  I know from my years in the military that playing Texas hold’em is a pretty big deal.  Almost every weekend you can find a game or 10 going on in every military community, dorm, base housing and the clubs.  It just goes hand in hand with the national love for the game.  We decided, why not have our own free WSOP club Just For Military!

JFM has launched what we hope to be the biggest military group of Texas hold’em players online.  We will host regular playing tables which you will be able to play on daily, but the big draw will be our tournaments.  Once your registration is approved, you will be a member of the exclusive club.  Your playing statistics will be kept and you will be ranked among all military players.  We will host tournaments all year long and four exclusive tournaments to which the Military WSOP champion title will be given.  Our major tournaments will be sponsored events and prizes will be awarded.  Our extreme goal…to sponsor our annual Military WSOP Champion in the WSOP tournament in Las Vegas!

Do you think you have what it takes to be the best military Texas hold’em player?  Why not represent your branch and/or your unit and join the club.  E-mail us at pokerstars(at)justformilitary(dot)com for details and an invitation.

Remember, you must be active duty, reserve/guard, retired, dependant or veteran to be in the club.